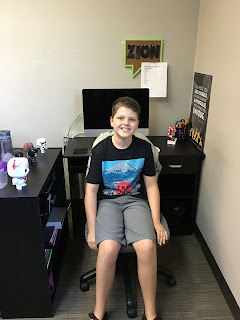 I am so blessed. I am so loved. I am fortunate.  I am optimistic.

Sometimes I didn't know if we were going to get Zion through certain times in his life. So many hard times have faced him and I am sure they are not over. But I have always been optimistic.

Last year was probably one of the hardest times in his and our life. He was not doing well socially and emotionally at school. He was being bullied, he was feeling lonely and he was feeling desperate. He would pretend to faint in the halls. He would refuse to leave the house in the morning. He would pretend or actually be sick to get out of school. He was having poor behavior and threatening to hurt himself unless he could stay home.  After a rather horrible emotional breakdown at school, his doctor and Jason and I, decided that he needed to be taken out and go on homebound.

He did well, but he was still lonely and still hated the thought of returning to school in the fall. Today he still says almost everyday that last year was the worst year of his life. And whenever we pass the Jr. High he cringes and says how much he hated that school. Jr. High is hard on every kid, but it is especially hard on someone with special needs or different abilities.

So getting back to my story. At the end of the homebound year, I found out through a friend that a new school was opening for children with high functioning autism in Springfield. We went to the open house and we were so excited. I realized that this was life or death for Zion. WE HAD TO GET HIM INTO THIS SCHOOL. It didn't matter what we had to do to make it certain that he would go to this school and the cost was considerable.

He was accepted in late July, we just had to find the funds. At about that time, Jason got a considerable bonus from his employer. It gave us the ability to pay for Zion's school year. Everything happens at the right time.

Only twelve students would attend this school; a mixture of middle schoolers and high schoolers. It seriously is one of the top ten blessings in Zion's life. He has been attending the school for a semester now and he loves it. He still has his "bad days" and doesn't want to go to school or work. But most of the time he goes without problems and works hard each day. He has straight A's and loves the different nature of the school and that he can still love beanie babies and maintain some of his habits that kids at the regular school just didn't understand or accept.

Let me tell you about this school. Like I said it is a small school. Today there are only ten students and five staff. There is a middle school room with six students and a high school class with 4 students. They have an amazing director who also has a child with ASD. She essentially developed this school so that her child could have a safe school to attend and also have the school environment that she was missing.

They DO school differently. It is interactive. They have classes in twenty minute blocks. They earn coins though out the day according to hard work and behavior, that the kids can then trade in for prizes. They take martial arts and yoga and go on a walk every day (if weather permits). The have flex Fridays where they go on field trips or learn life skills training. They also cook for each other and clean their own school building. They even have planned a trip to the space camp at the NASA Space and Rocket Center in Alabama.

The changes I have seen in Zion since attending his new school are pretty amazing. He is willing to help more at home. He is excited to see his friends and tell them about his weekend. He loves his teachers. He loves to read more. He really loves researching and taking notes. He also came home the other day with a girls phone number (oh boy!).

So I say again.

I am blessed. Jason has blessed me, by being my husband and giving me such an awesome life with these crazy kids. I am so fortunate, that we can afford this school. I am so thankful for this school that came into existence right when we needed it. I am happy that Zion is happy and I am optimistic for his future. He has his family and now he has ten good friends to share his life with.
Posted by Zion's Mom at 10:26 AM