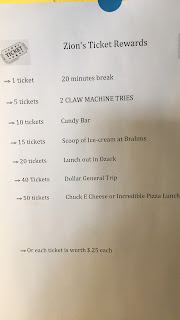 I haven't written in a long time. Mostly I have just posted links to other articles. Well, I think I am going to get back to the writing process so I can log our lives for posterity. :) I'm sure Zion will just love that as he gets older, NOT. However, since you are all on the autism journey with us, I wanted to tell you a bit about what is going on.

Zion entered 7th grade this past year. He has been keeping up with his grades and doing well. About once a month I get a call to come get him because he is sick. He seems to get sick a lot at school. I could tell that he just wanted to leave, because once he was home he miraculously became well again. Then a couple months ago it become more regular. He would pretend to faint in the hall or pretend to vomit need to go home. Once he gets to the nurse, he becomes mad at her because she wants him to go back to class.

He then began to tell me that boys in some of his classes were giving him assignments that he had to complete before the next day. Some of these "assignments" were benign and some were serious. He would come home and tell me what he needed to do that night and I would say absolutely not and that he needed to ignore these boys. Zion would go back to school and have to stand up for himself, which he could not do. He thought they were being friends, but they were bullying him. He became caught between Jason and I telling him not to do it and the bullies at school telling him he must do it.

Sometimes Zion would do what the boys wanted (looking up certain things on the internet) and sometimes he wouldn't because he knew it was wrong. He has become frustrated with school and does not want to see these boys or do anything related to school. We also know that he has been made fun of numerous times, which is normal for most kids, but Zion does not understand why people are mean. He is a very empathetic boy and wishes everyone was kind to one another.

Last Tuesday he became very depressed and we decided to take him out of school on the instructions of his doctors. He is now being taught by me until he gets approved for homebound school. I hope at some point to bring him back to school. The school staff has been wonderful and have tried to figure out who these boys are, but Zion is not the best with descriptions.

He had a horrible time last week. But we are getting through it. He is so happy to be home. He doesn't like the stress of schoolwork, but I have made him a ticket system so that he can work and get rewarded for it. He is actually excited to do his work each day now.

I think that this is a great move for Zion and our family. Even better is the fact that next week is Spring Break and he can return to baseline much more quickly. He will relax and have a great time at the beach.
Posted by Zion's Mom at 9:24 PM