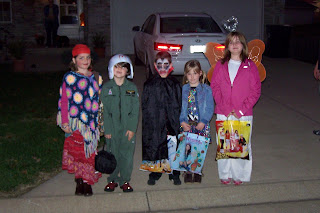 This Halloween was a pretty big step up for Zion. The past few years he hasn't really understood the dressing up and going out asking for candy. Most of the houses that we went to last year I had to tell the people inside that he had autism and that is why he just walked right into their house and sat down or why he didn't come within ten feet of the inflatable casket with smoke pouring out. This year he was the one leading the gang. First of all he started getting ready for Halloween October 1st. He has looked forward with much anticipation to the school party, trick or treating and "the pumpkin patch."

Halloween night we dressed him up in the little Air Force pilot's outfit (embroidered with his name) from his aunt Jessica and bought a Speed Racer helmet at Walmart. He hated that the helmet kept yelling speed racer noises in his ear, but we told him he would get more candy if he kept it on. He got in to the swing of things and didn't seem scared of the inflated skeletons or huge clown giving out candy. The only thing that seemed to faze him at all was when he came around a car in the drive way and saw the homeowner dressed up as a zombie, sitting in a chair ready to scare whomever came to his door. I don't think he got candy from that house, he ran too fast. But on the other hand, every child ran. It wasn't just the child with autism.

I am just so proud of him. He conquered a lot of fears this past weekend. He realized that the sounds, smells, and smoke and illusions are all just part of the holiday. There are actually people behind those masks and they are just wanting candy too! We are all out there for one thing. And I think we have found the reward for Zion for all those fears conquered. Candy! 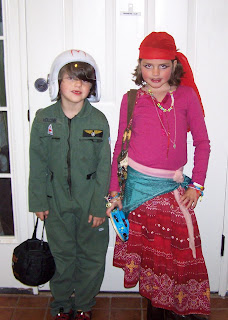